A natural comedian with an insightful, laugh-out-loud view of the greater world

Few folk singers, if any, communicated with an audience like Vin Garbutt. A natural comedian with an insightful, laugh-out-loud view of the greater world that he frequently toured, Garbutt also drew criticism and admiration for his topical songs on such issues as abortion and sectarian violence in Northern Ireland. Largely, though, he poignantly wrote about his North-East of England and its pictorial valleys, picturesque fishing villages, and daunting industrial centres. These he complimented with songs and tunes from the British and Irish traditions by accompanying himself splendidly on acoustic guitar or tin whistle. His hilarious, passionate, highly accomplished stage performances earned him the first BBC Radio 2 Folk Award for Best Live Act.

Vin Garbutt died June 6, due to complications related to heart disease. He was 69. He is survived by his wife Pat and their four children, Emma, Tim, Katie and Louis. See the next edition of Penguin Eggs magazine for the full article. 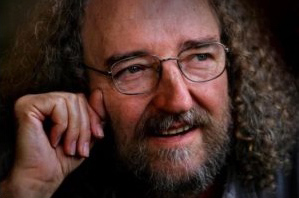