My thanks out to you all for the support…

My thanks out to you all for the support…

OK so I have not been on Facebook for a lot of weeks but now it is high time that I sent my thanks out to you all for the support that I have received since Vin died.

The tributes and messages on the internet that immediately poured in from every corner of the world were an unbelievable flowing tide that comforted me more than you could imagine at a time when I could not even believe what had happened. My children constantly read excerpts to me as I could not read them myself. But I promise you that every one of them has been saved and I will read each one many times over. I have also received literally hundreds of cards and letters. I will also read these over and over again to imprint on my mind all the beautiful words that you have taken the time to write.

I cannot tell you about my feelings on the day of the funeral as I do not have the words. But to see the cathedral completely full and to hear your voices singing as we came in with Vin was beautiful. The service was everything we had hoped it would be and I was so proud of my children and my family and all of those who bravely got up to speak.

Vin would never have believed the things that have happened to honour him since that day although twelve years ago when he first became ill he received many many cards and letters wishing him well. He joked that it was like being at his own funeral even though he was OK. So he knew how much you all loved him because you had already told him and showed him by supporting his gigs where ever he went.

Thank you for everything from myself and our children, Emma, Tim, Katie and Louis. Your words of comfort are getting us through this. 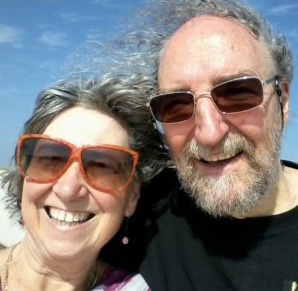