A novel and new CD from Jez Lowe

Exciting news from our old pal and Tim’s fellow County Durham boy Jez Lowe. A little bird told us he has an upcoming album of traditional songs – to accompany the publication of his first novel in November. Those of you who’ve listened to Jez’s lyrics won’t be surprised that he has turned his hand to this more extended form of wordsmithing. We can’t wait to hear the album and read the book. There’ll be bidding for the film rights next! 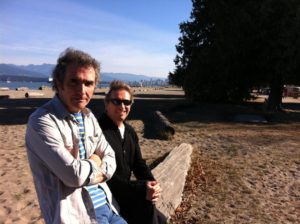 The EXILES featured in The Magpie 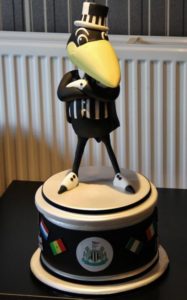 There was a feature in the last edition of The Magpie magazine produced by the Newcastle United Supporters Club of London about the Exiles and their songs about the Toon. It included Alan Millen’s new regular column, which we’ve reproduced with links to some of our videos below.

A regular column, Alan Millen, one half of The Exiles, a song-writing duo based in Switzerland & Canada brings us some more tunes and tales from their collection. Alan Millen & his musical partner Tim Readman as ‘The Exiles’ write songs about and inspired by Newcastle Utd. In total they have written around 50 songs about the highs & lows of supporting The Toon.
Way Back Home, from our second cd, celebrates the Toon Army travellers of the past season, during which the club set a record of 14 wins away from home. The video revisits each of the three-pointers.

We wrote and recorded this back in 2007 but with the record-setting achievement now in the bag I was inspired to round up the pictures and make something more out of the song. The camaraderie of away-day travel is at the heart of the song. On a personal note, my only away-day league experiences with NUFC have been at Craven Cottage, none of which resulted in the celebration of three points! However, I’ll never forget being at the San Siro for the 2-2 draw with Inter Milan.

Until My Dying Day – As we prepared for the 2016-17 season I posted a video on Facebook in memory of my dear old dad, who passed away a few days after we narrowly escaped relegation at the end of the 2014-2015 season. His first visit to SJP was in 1935, when we were in the old Second Division. I believe the last time he saw NUFC play was at the 1955 F.A. Cup Final, together with his own dad. We were living in Hemel Hempstead at the time. Immigration to Canada in 1957 ended his days of seeing NUFC in person but he was a supporter until his dying day, just like the song says.

The inspiration for this came within minutes of buying a 45rpm single of House of the Rising Sun by The Animals at a charity shop in Newcastle. I think it was in September 2002 because I was there then for the funeral of my auntie Rita, my dad’s older sister.

We were gutted to hear of the death of Walter Becker.

His solo albums 11 Tracks of Whack and Circus Money are never far from the hi-fi at Big City Towers. His work with Donald Fagan in Steely Dan is simply peerless. He’ll be sorely missed. We missed Donald at his September Seattle show, which was understandably cancelled.

Donald has vowed to continue touring with the Steely Dan band, which is at least some consolation. Walter Becker, R.I.P.

We were pleased to see an interview with Tim’s former collaborator Che Aimee Dorval in Proglodytes. It’s great to see Che out there making it happen. Those of you who came to Tim’s ‘musical friends’ nights at Montmartre Café in East Vancouver will remember Che’s stunning voice, especially her amazing versions of Zero 7’s ‘Somersault and David’ Gray’s ‘Sail Away’.

For more about that go here: http://timreadman.com/bandspast-and-present/montmartre-cafe-tim-readman-and-musical-friends/

In the interview she says:

We got our first computer with Garage Band on it, and I got heavy into writing and producing songs. One of those songs was “Lights Out” off of Vol. 1. Also, at this point, I was working with this amazing local musician, Tim Readman, who was teaching me guitar and the basics of songwriting. He had a weekly night at a French bistro in Vancouver and I sang at occasionally. It was with him and one of his producer friends that I recorded my first demo called Lights Out that I sold out of a coffee shop for a year before eventually losing the masters. So that’s gone for good.
The link to the whole interview is here but we had some troubles with it so we recommend you copy and paste it rather than clicking it. If it doesn’t work you can get to the interview via Che’s Facebook page or by Googling ‘Interview with Ché Aimee Dorval’.

Meanwhile we are looking high and low to see if we can find our copy of Lights Out!!

September 2017…And We Are Still Going Blue

We received a new CD from Tim’s former Seaham schoolmate and (briefly) Kane Gang band mate Dave Brewis. Dave is a multi-instrumentalist who played most of the instruments on The Kane Gang’s hit records. He also produced and played with Prefab Sprout who were lead by Paddy MacAloon. Paddy went on to write the songs for Crocodile Shoes with Jimmy Nail. Anyway … Dave’s album is here – 12 tracks of Soul guitar music! It has been on the Big City hi-fi non-stop – in between Walter Becker’s albums – for the past several weeks now. It’s well worth getting hold of a copy. http://www.autoleisureland.com